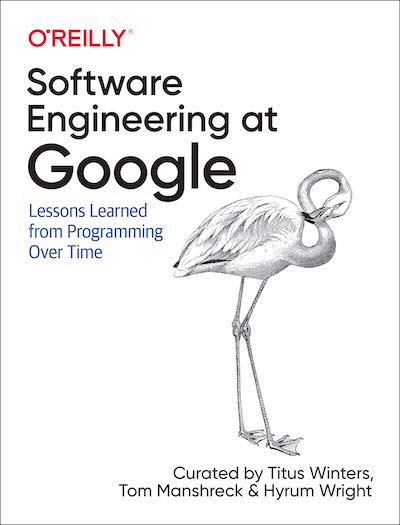 In short, the book greatly enhanced my software engineering comprehension and gave me motivation for further experimentation. The book wasn’t easy to digest, many authors, different writing styles, repetitions across chapters, and over 600 pages in paperback version. But I don’t regret even a minute of reading. I rated the book with 5 stars on Goodreads. Until now only 17 of 80 technical books I read have got top scores 😀.

Below you can find a few personal notes taken when I was reading the book.

Ubiquitous law, referenced many times in the book.

With a sufficient number of users of an API, it does not matter what you promise in the contract: all observable behaviors of your system will be depended on by somebody.

For example, Linux wraps process identifiers (PID) when they exceed 32768 (2^15). Even if you can set the higher value, it would break because many libraries assume that the maximum is 32768.

You may choose to not change things, but you need to be capable.

Rules help us to manage complexity and build a maintainable codebase.

The code review process is the primary developer workflow upon which almost all other processes must hang, from testing to static analysis to CI.

It has enabled us to build larger systems with larger teams, faster than we ever thought possible.

Software engineers need to realize that producing quality documentation is part of their job and saves them time and effort in the long run.

Scalably maintaining complex software systems over time is more than just building and running software: we must also be able to remove systems that are obsolete or otherwise unused.

How others have done something with this API? Where a specific piece of information exists in the codebase? What a specific part of the codebase is doing? Why a certain piece of code was added, or why it behaves in a certain way?

No matter the size of your organization, it’s reasonable to think about how you would make these kinds of sweeping changes across your collection of source code. Whether by choice or by necessity, having this ability will allow greater flexibility as your organization scales while keeping your source code malleable over time.

Responsible for the performance, productivity, and happiness of every person on their team including their tech lead while still making sure that the needs of the business are met by the product for which they are responsible

Responsible for the technical aspects of the product, including technology decisions and choices, architecture, priorities, velocity, and general project management (although on larger teams they might have program managers helping out with this). Also an individual contributor.

A single person who can handle both the people and technical needs of their team. At Google, it’s customary for larger, well-established teams to have a pair of leaders—one TL and one engineering manager—working together as partners. The theory is that it’s really difficult to do both jobs at the same time (well) without completely burning out, so it’s better to have two specialists crushing each role with dedicated focus.

Last week I virtually attended Apache Beam Summit 2022 held in Austin, Texas. The event concentrates around Apache Beam and the runners like Dataflow, Flink, Spark or Samza. Below you can find my overall impression of the conference and notes from several interesting sessions. If some aspect was particularly appeal...